A profile of Bruce Jack 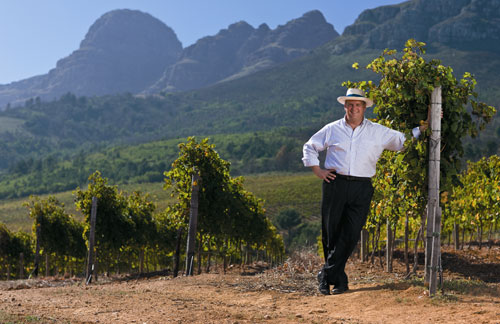 Bruce Jack is one of the most engaging characters in the global wine trade. Minutes, hours, probably days can pass in this man’s company. I had once arranged to meet him for lunch in South Africa while out for Cape 2010, but I had organised to be picked up in a couple of hours to go somewhere else. Jack turned up clutching loads of bottles and obviously intent on spending the afternoon drinking, talking and probably ultimately tap dancing or rapping. Knowing him far better now, I know what an idiot I was. That might have been one of my greatest, most memorable work-day afternoons. Sadly, I’ll never know.

His talent goes beyond superlative winemaking. The man can also write. So when our interview got curtailed because he had to go off and conduct a wine tasting, I submitted some questions. Jack’s answers are so good that all I will do is run them as they are. Why try to improve what is already excellent?

Firstly, I asked for a biography of Accolade’s chief winemaker, South Africa. This is what the 44-year-old wrote: “I grew up on Surfers’ Corner in Cape Town, where, almost 40 years later, I still surf. The son of an inspirational architect and gifted musician/writer there was always the chance I’d have to become a winemaker.

“Growing up in Cape Town meant Table Mountain was my back yard. My first job was an early morning newspaper round. An early memorable food experience was tasting caviar for the first time on a prep school UK rugby tour and loving it. Fortunately, this predilection for expensive taste only rarely extends beyond food, wine and books – although my wife suggests that’s bad enough.”

The young Jack got into plenty of scrapes and said: “The biggest advantage of growing up in Cape Town was that I learnt the secret password for passing through the Pearly Gates, thanks to Mrs Jimba, my isiXhosa [an official SA language] teacher. I am mildly surprised I didn’t need to use that password on numerous occasions during my young adult life.”

At much pressure Jack released the secret to me: ‘Uxolo’, which means peace – as Jack quipped: “An interesting concept in the late 70s in South Africa.”

And here are his answers to my subsequent questions:

Which wine or range are you most proud of and why?

“That’s a seemingly obvious question, but it’s actually a tough one. Firstly with me pride really does come before a fall, and over the years of much falling, I’ve become a bit weary of pride. So when I get that tickle of elation at what appears at the time to be because of my brilliant self, there is, as sure as hell, a rocket of ego destruction flying straight at me from over the horizon.

“Looking back on a relatively short, but action packed career, a few wines have stood out to date.

“The first wine I ever got listed in a UK supermarket was called Lions Head and was a zippy Chenin/Muscat blend from the 1993 vintage. I used to hang out at Morrisons and enthusiastically accost startled shoppers, ensuring they bought lots. I made that with Zakkie Bester, with whom I started the Fish Hoek brand.

“A 1997 Sonoma Coast single vineyard Chardonnay I made with Greg La Follette at Flowers Vineyard and winery. I was left in charge of the winery one day and these beautiful Hyde clone Chardonnay grapes arrived without notice.

“The flavours bowled me over and I decided to give the grapes six hours’ skin contact after crushing, which was a little bit against the formula and not really done then in California, especially if you’re trying to make Burgundian style Chard.

“Anyway, Greg is a bit of a philosopher and forgave my winemaking indiscretion when he tasted the finished wine. It was a cracker and was eventually bottled separately, which is the biggest compliment you can pay to a cellar hand.

“A 1999 Pinot Noir made at Flagstone from the very unfashionable Swiss clone BK5. It was the only Pinot Noir I could get my hands on in the early years.

“Unusually I put the wine in an American barrel I had discovered in California, from Barrel Associates.

“They make some of the best barrels in the world, from specific, long aged stave wood, and coopered in a proprietary way, which really supports delicate wines like Pinot Noir.

“It was the wine that put Flagstone on the map. It was made with no added SO2 and had a distinctive and unusual label. It was a sublime wine made from an old virus-infected block on the Stellenbosch Hills. It proved to me that anything was possible if you worked harder than anyone else and believed in a dream.”

What is your favourite wine and Why?

“It’s amazing how well an off-dry Riesling goes with Eggs Benedict in the morning – so that’s my favourite breakfast wine. I love drinking old Amontillado in the Jacuzzi.

“Krug and cigars are a dangerous, rich and ultimately foolish combination, but it’s important to tip into the vertigo of decadence every now and again, even if just to remind yourself that life is finite.

“I always start craving crisp, minerally Sauvignon Blanc from the Elim ward when I see oysters, or if Shakespeare is in the offing. Somehow, when you’re watching Shakespeare, it helps to have a bit of alcohol in you. His original audiences would have unquestioningly all been a bit tight, so he would have written his works with this in mind. Sauvignon Blanc, when balanced and bone dry, and not too confected, seems to work so well with his plays. I laugh more and sit gaping at awe at his genius and how something written so long ago still frames the human condition so beautifully.

“For me the ultimate lunch wine is slightly chilled Pinotage with a view of our brooding, judgemental mountains hanging over you. After a big surf you can’t go wrong with rich, creamy Chenin Blanc – something I’ve never been able to make very well. And with dinner, the world just opens up, but it always seems to curl back like a cat’s tail on Pinot Noir – a stealthy heartbreaker, apparently unencumbered by the rules of love everyone else in the grape kingdom must live by.

Seduction is fleeting, but the memory of a great example can last a lifetime. Its embrace is often unexpected, arriving halfway into a bottle, but the grip, when it comes, is dramatic, unyielding and can be inspiring. In most cases Pinot Noir underwhelms me, to the point now, well into my serious drinking years, where I am still brilliantly taken aback by the magic when it does appear.”

What is your favourite grape variety to work with and consume?

“Favourite to work with has to be Pinotage, because it scares the living daylights out of me. I never know if I am going to get it right, or if it’s going to explode in my face. Pinotage is like a race horse, it can smell fear at 20 paces. It is the equivalent of an adrenalin rush, from the moment you step foot in the vineyard at pruning time. But when you get it really right (and that’s not very often), it is without doubt the most delicious red wine in the world to drink. The life-changing examples are so few and far between, however.”

What do you do to relax – hobbies, passions?

“I have a family (wife Penelope and two boys), so I am discovering that hobbies can actually be fun. I used to hate the idea of a hobby. I used to think you should only ever do something if there was a reason to do so.

“Now my boys are making me build go-karts, scuba dive, fish, etc… all things that waste work time. But it’s great doing them together – that’s the biggest kick. I’ve surfed for about 37 years, which is the only time my brain is quiet, which is a blessed relief I can tell you.

“I am passionate about books, but you knew that already. They are my comfort blankets.”

What is there left for you to do, achieve?

“Lots, but I first need to remember to buy flowers for my wife more often.”

This article was originally featured on Drinks International