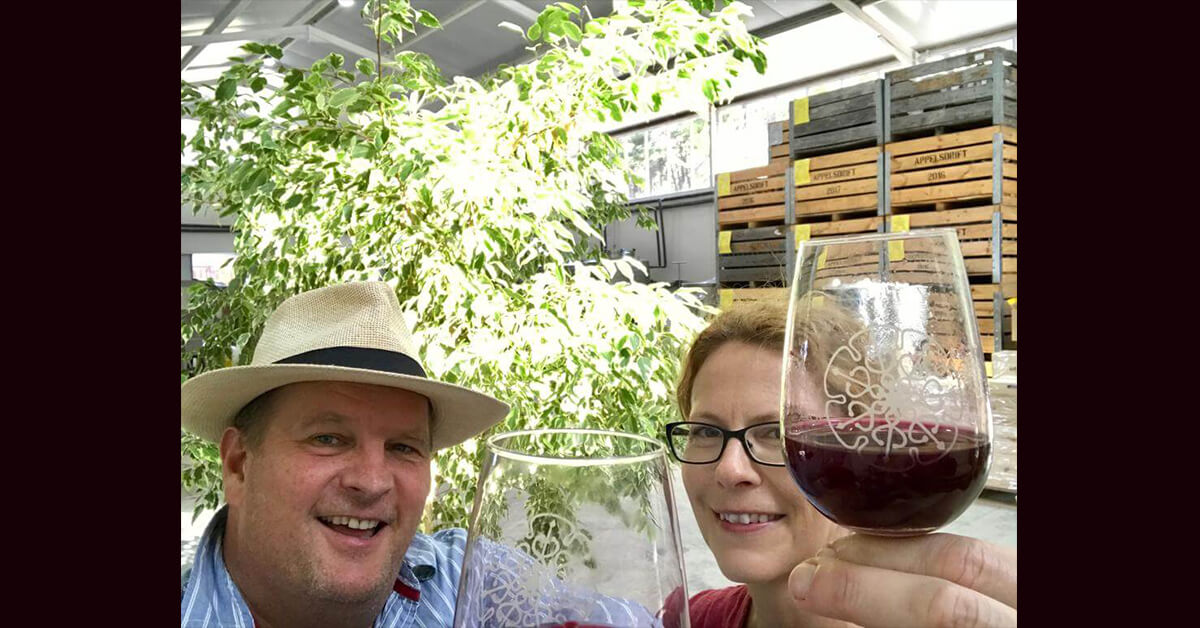 Bruce Jack and Marlize Beyers, winemaker at The Drift Estate, toast to a lively 2019 harvest

It’s the bitterly cold February of 1819. A Burgundian farmer called Jacques rubs his gloved hands together and walks briskly into the freezing wind. His woollen scarf covers his generous nose, smelling comfortingly of wood smoke.

Once in his favourite Pinot Noir vineyard he cuts canes from pre-marked vines. These were selected during the previous growing season for their strength and balanced internode length. They will become the vines of a new vineyard he plants in the field alongside, just over the snow-covered country lane.

Eighteen months later he is surprised to discover that one of these new vines is not bearing red grapes like the rest of the vineyard, but white grapes. Some strange genetic mutation has taken place to render the grapes from this specific vine different from the parent plant. This unexpected lack of colour (the lab coats call these colour compounds anthocyanidins) is not unheard of, but certainly rare.

He tentatively tastes a ripening berry. His bushy eyebrows raise with delight at the explosion of peachy flavour and a sparkle appears at the corner of his old eyes. He marks the vine by tying a piece of undyed linen around the trunk. That winter he returns to the marked vine and carefully collects cuttings from this vine only, planting them separately in a protected, methodically-prepared patch behind his farm house.

From these resulting few baby vines, he takes more cuttings for the next four or five winters, slowly and patiently multiplying his discovery and expanding his patch of white-fruit-bearing vines, until he has enough to harvest sufficient bunches to make a small batch of wine.

The result is delicious, and he calls the new variety Pinot Blanc.

This story more or less describes how the variety Pinot Blanc could have come into commercial existence, although we don’t know for sure. What we do know is, if nature had her way, and our fictional Jacques hadn’t intervened, we wouldn’t have Pinot Blanc.

“There is white wine and then there is Real Wine”

In fact, we wouldn’t have any white varieties at – we’d only be drinking red wine because white grapes never flourished in nature. Primarily because birds and other animals are less attracted to white grapes than red – so dispersal of seeds is less common or successful.

It’s poetically ironic that those often misguided “natural” wine evangelists don’t realise the vast majority of the white wine grapes we know today are the result of human intervention, not nature.

A half-joke amongst winemakers goes: “There is white wine and then there is Real Wine” – inferring that white wine is a meek afterthought.

The reason is not because white wine is less complex, or less arresting, but because it isn’t red.

The colour red elicits a staggering range and depth of emotional responses. Psychologists, like scientists,

describe red as “warm”, suggesting it is the colour we respond to with the most intensity.

We know the colour red can enrage and disturb. It’s the colour of spilt blood, the colour of matador capes, social revolutions and stop signs. Drivers gridlocked in traffic by a red car react faster and more aggressively than drivers blocked by vehicles of other colours.

But it is also the colour of love and passion – of valentine hearts and prostitution. A recent experiment demonstrated that women wearing red lipstick were almost twice as likely to be chatted up at bar than women wearing lipstick of another colour. Similarly, women dressed in red were rated as more sexually desirable by male experimental participants than when dressed in other colours.

We have used it on a big scale since we first mastered cognitive abilities, choosing red ochre pigments to illustrate our cave walls.

In the Christian tradition it symbolises the blood of Christ through red wine. In China red represents luck and happiness and bridal wear is red, not white.

Why don’t Hollywood starlets walk up a blue carpet? Because red is overt, grand, celebratory, powerful and attention-grabbing.

Weirdly, it grabs our attention in a deeply emotional way, not in a fight-or-flight way. Red isn’t noticed as easily as yellow for example, especially in low light conditions, which is why fire engines at the Santa Cruz Fire Department in California are lime yellow. Records prove that lime yellow fire engines are involved in significantly fewer accidents than red ones.

The colour red may not grab us as immediately as other colours, but it grabs our heart and our soul like no other. Like blood, it seeps in and bonds. Like wine it stains our psyche.

Surprisingly almost 100% of all red grapes have white juice – the colour comes from the skins. Because of this, the crafting of red wine differs significantly from white, as red wine is made by fermenting the juice in contact with the skins, while the juice from white grapes is generally separated from the skins as soon as possible in the winemaking process.

Every harvest when we crush the first red grapes, normally Pinot Noir, and I watch the colour slowly develop over a day or so in the open-top tank something happens to me. Its difficult to put into words, but I guess it feels like I am being recharged, that I am getting plugged into the power-bank of life. And I’ve learnt from watching that process that I can predict what the vintage will offer me. Weak-coloured Pinot Noir juice is not a good sign. 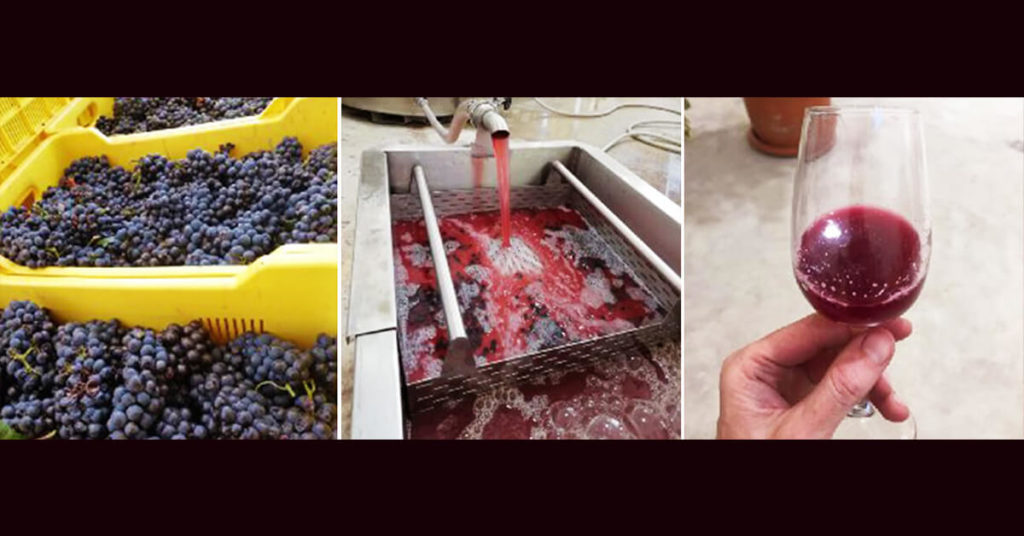 The first Pinot Noir grapes and juice on The Drift Estate, this year

Despite low alcohols and floral, elegant, balanced young wines the 2019 Pinots have the most intense, alive colour I have seen in 30 vintages. The first few fermenting tanks are about to be pressed in the next day or two and the wines are a staggering purple-black. I can hardly believe the elegant, enticing soul, swooning below this impenetrable, mysterious cloak of colour.

This means it’s going to be a remarkable vintage, maybe a once-in-a-lifetime vintage, because scientific research has proven a strong correlation between colour concentration at relatively low sugar levels with brilliant quality wine.

I’ve never seen anything like this before. Hang onto your hats, people, 2019 is something really special.

Love, light and a glass of true wine,