There are still mysteries – how the label designed itself 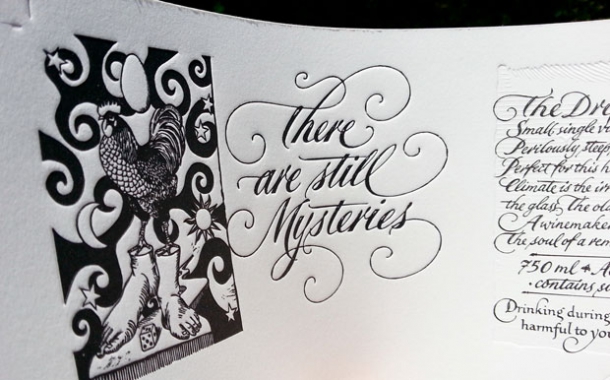 I am a calligrapher, not a professional packaging designer, and I think I'd ordinarily have felt intimidated by a wine of this calibre but it was one of those labels which, as the designer, on rare occasions gets to say, “designed itself”. It sort of grew like a fresh shoot out of the basic elements Bruce handed me. He gave me a charming and intriguing woodcut print and an equally engaging and unusual name which reminded me of Voltaire's famous aphorism: “The secret to being a bore is to tell everything.” “There Are Still Mysteries” whispered to me that they were to be the only words on the front label.

The layout grew with a will of its own out of the woodcut which plays with the mathematical relations of the Golden Ratio, the ratio by which all things grow. Since the woodcut was Pi, the space for the text had to be square, simple as that. It was the ghost of Fibonacci breathing its own life into the design. After that, the hand lettering simply had to follow through and express the genetic code already there. As an afterthought, I did some perceptual correction for the curvature of the bottle. I felt like I'd dropped some flowers into a vase and, head all askance, was giving it a turn.

The back label text was the only part I struggled with. The text grabbed me. Usually I'd avoid putting a whole lot of creative energy into the technical stuff of a back label but I'd never encountered back label text like it and was immediately taken with a desire to hand write it, to make it look like that remote, windswept, extreme slope Bruce describes. I should have known, but It turned out very difficult to write it, with letters that looked like fynbos, and still have it legible at back label size. I almost gave up but Bruce surprised me by suggesting we just make it bigger. And so it is now unusually large, but naturally so. Had I typeset it, there'd have been no problem forcing it to be the size I thought was right, but type is a form of mass production, and it seems this wine wants no part of that!

Indeed, this is an intensely personal design. The work of art is by Bruce's wife, Penny, the back label contains his own, passionate text, the paper is hand made and aside from the bar code, the lettering is all done by hand. I thought “stuff that” and put the bar code on upside-down. The labels are letterpress printed on a small, ancient machine that hisses and puffs like a weight lifter doing a quick fifty. The labels are then hand torn and hand applied. The end result is as tactile as it is personal. I think whoever gets to fondle a bottle of their own should give it to a friend and they should sneak off with it to a lovely hillside somewhere …